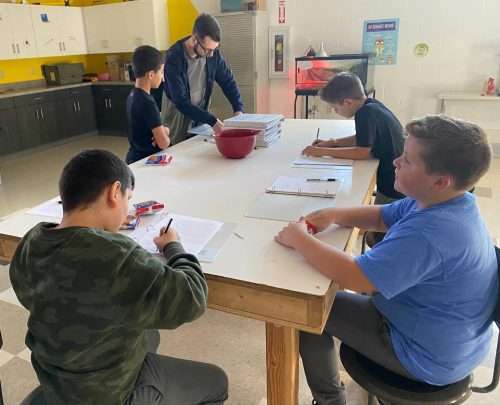 Making connections with other members and having positive role models. Two things that are at the heart of the Boys & Girls Clubs of Elkhart County experience.

Boys at the Middlebury Clubhouse have a new way to make those connections. “Guy Talk” is a program targeting members eight and older every Thursday afternoon. Led by Athletic Supervisor Nick Sherk, the program is an extension of the Passport to Manhood program, which engages young people in discussions and activities that reinforce positive behavior.

“The main goal is to give the boys a chance to just hang out with other boys in a positive, supportive environment,” Sherk said. 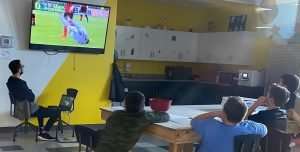 Sherk said they want to expose the boys to a variety of topics. Some are simple — like learning to tie a tie, but it also gives them a chance to connect with outside speakers or talk about things like sports.

At the start of each session, Sherk and the members take a few minutes to make predictions on who they think will win an upcoming sports competition. The next week, whoever made the most correct predictions wins a prize.

“We were excited that Nick was willing to go beyond his normal responsibilities to offer something the members were requesting,” said Middlebury Area Director Erin McNeal.

So far about a dozen members are taking part, but Sherk hopes to grow the program in the coming months. He lets the members guide the discussion topics.

“They give suggestions a couple of weeks in advance so the activity can be planned out,” he said. “I enjoy it because it’s nice to be with a smaller group and invest in them. It’s something you can’t do on the same level in a gym full of kids.”

Sherk said the members want to venture outside the building in the future — possibly visiting an area college to see what campus life is like.

“I think it’s important they have a say in the programming, but that they have a positive role model and mentor they can feel comfortable talking with,” McNeal said.