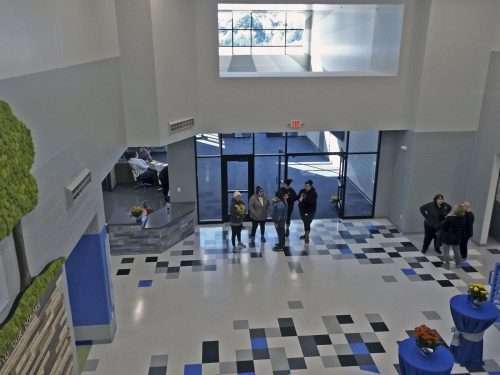 NAPPANEE — The open house for the new Nappanee Boys & Girls Club, the Shea & Leavitt Families Clubhouse, was the culmination of a community effort to bring the new facility to the city. That community was invited to the club for a tour of the two-story facility Saturday.

“We are very excited and blessed,” Mandy Gerber, director of the Nappanee Boys & Girls Club said. “I can’t wait for the kids to come in on Thursday.”

“Plus, the location is great,” she said.

The new facility is next to Nappanee Elementary School, built on the former soccer fields for the high school. The new club is part of Wa Nee Vision 2020, which entailed building new soccer fields at Wellfield Park, the new club and moving the Family Christian Development Center and Elder Haus into the vacated space utilized by the club for more than 20 years.

“There’s a buzz in the community,” she added. “People are excited and we anticipate our numbers will grow.”

The director also said she was excited about being able to build on the program they have and the “overall club experience.”

Gerber explained the club is named for the Shea and Leavitt families.

“Jim Shea is a very generous donor who was instrumental in making this happen,” she said. “He really wanted to honor the Leavitt family’s work in the community in identifying the need 21 years ago for a club here and felt it was a way to honor their involvement.”

Fourth-grader Kelsey Hamsher was having fun in the playhouse coffee station and said she really liked the new club.

“It has so much more space,” she added.

The Cappert family headed straight to the gym, where third-grader Austin immediately started tossing a football with a staff member. His mom, Becky, said Austin loves to visit the club and loves the gym. His sister, Lucy, said she also loves the club and playing kickball.

Becky added the new club was “a great thing for the community.”

Jimmy Cappert said he especially “liked the fact that they have outdoor space for them now.”

Fifth-grader Bryson Bradley and a friend were enjoying all the refreshments provided by numerous Nappanee businesses.

“I love it! It’s amazing! I love everything I’ve seen so far,” Bryson said.

The boy and his friend, who both attend Nappanee Elementary School, said they were former members but were looking forward to joining again. The PS4 and Xbox games at the club were high on their list of cool things.

Loren Johns, one of the interior designers for the new club, was present with her family and said she was “very thrilled” to see it completed and the community tour, but added she will most enjoy watching the community’s children begin using it.

Board president Sylvia Benjamin was greeting visitors and said, “This is a great day — the community has been amazing!”