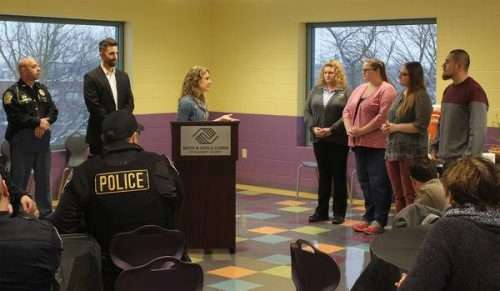 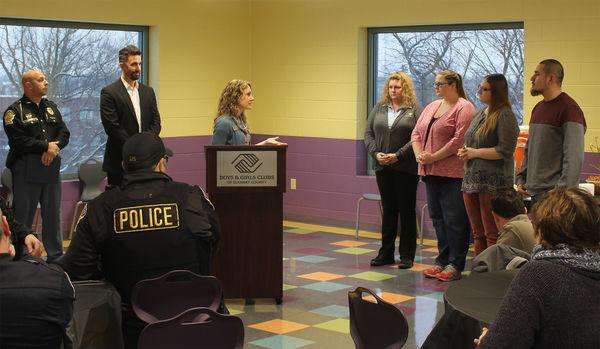 GOSHEN — Kathy Mangona was the closest when a man suddenly attacked a woman in a car outside the Boys and Girls Club on Dec. 5.

She had just picked up her daughter from the after-school center about 5 p.m. and was preparing to leave when Jorge Lopez Chinchilla walked past, broke the driver’s window of the nearby vehicle and began stabbing the woman who was behind the wheel. Mangona parked behind the vehicle to prevent Chinchilla from driving away and started honking her horn to get somebody’s attention.

“He walked behind my vehicle, and walked up behind their car and broke a window and attacked,” she said Thursday during a recognition ceremony at the club for her and other parents who intervened. “You look in the rearview mirror to back up, but I saw him come around in the rearview mirror, and yeah, we were trying to leave.”

Two other parents heard the victim calling for help and yanked Chinchilla out of the window by his legs and pinned him to the ground. Others called 911, helped the victim get inside the club and flagged down the police as they arrived.

Goshen Police soon found Chinchilla and arrested him. The woman had injuries to her face, chest and leg but she survived.

The club, police department and mayor’s office took time to recognize everyone who acted that night. Mangona was recognized along with Debi Gleva, Juan Alvarez and Lyndsay Friednan, who all received a citizen commendation from the police.

That also included the officers who rushed to the club and who tracked Chinchilla to a nearby house, and the Goshen Community Schools counselors who were available in case any of the 350 students who attended the Boys and Girls Club the next day needed them.

“We gather here tonight to celebrate and to honor clear thinking, willingness to risk and the ability to take the right action when needed,” said Launa Leftwich, senior area director, Boys and Girls Club of Elkhart County. “This group of parents are our heroes. They saw a need and they acted.”

Goshen Police Chief Jose Miller said that while he wouldn’t ask everyone to risk their lives, the four parents did act as an example of community members stepping up when needed. Mayor Jeremy Stutsman praised them for taking action instead of pulling out their phones and recording the incident, like bystanders often do in an emergency.

Alvarez and Gleva recalled pulling Chinchilla out of the vehicle. Alvarez was stabbed twice in the side in the process, while Gleva ran inside the club to tell them what happened and ran back out to help the victim.

She said her kids were still in the club when it happened.

“They were proud of me,” Gleva said.