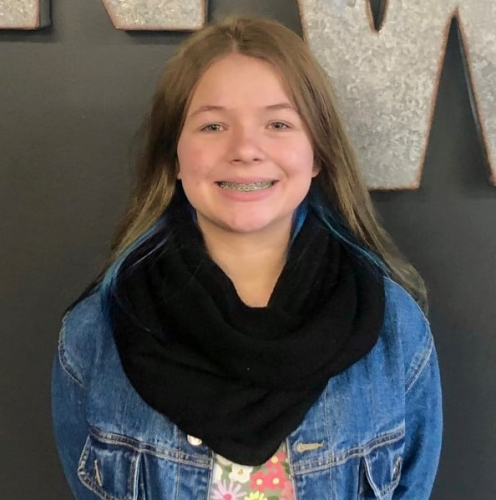 A little determination can go a long way in creating success. That’s one of the lessons Paige Truman learned on her way to becoming the Youth Of The Year winner for the Nappanee Clubhouse.

She will join the winners from the Elkhart, Goshen and Middlebury Clubs in the county-wide competition in mid-February. The winner of that competition moves on to compete at the state level.

“I have always been interested in Keystone (Club). When I found out about the Youth Of The Year project, I thought ‘why couldn’t I do that?’ I looked into it and met the age requirements and decided to go for it,” Truman said.

Keystone Club is the Boys & Girls Club’s teen program. It affords teens an opportunity to gain valuable leadership and service experience. Since 1947, Youth of the Year has been Boys & Girls Clubs of America’s premier leadership program, celebrating the extraordinary achievements of Club members who embody the values of leadership, service, academic excellence, and healthy lifestyles.

“The biggest motivation to try out for this was the college benefit. There are scholarships that could be given to me later on and it’s a great thing to put on my resume,” Truman said.

Truman works with other teens during the holidays in a “Santa’s Workshop” store they created to help club members buy gifts for their families.

She had some knowledge of how the program worked by watching others participate in past years.

“I heard our coordinator talk about how the candidates in the past needed to work on their speeches and essays. Getting into it, I learned how to write an essay — and speeches were even harder. But I managed to get through it,” she said.

Truman said she loved working with adult volunteers who came to the Club to help mentor the candidates through the process.

“My biggest takeaway is the determination I pulled from this. Being able to stick with it and not stop. My determination is so much better after this,” she said.

Nappanee Club Area Director Mandy Gerber said she’s been proud to watch Truman grow during her years as a member.

“She has displayed a great amount of maturity and personal growth, while reflection on what the Youth Of The Year process means to her,” Gerber said.

Truman credits Club with helping her learn to be more open and how to respect others.

“As I’ve grown up, I’ve learned that it’s a place to let your personality develop. The staff here has been amazing at helping develop that,” she said.

“I walk in and everyone is my friend, and they mean as much to me as my family does,” Truman said.

As she looks toward the county competition, she’s eager to meet the winners from the other Clubs.

“It’s always fun to meet new people. Being as young as I am, I’m one of the younger participants, that makes me a little nervous, but I also think that I have a good chance.

She hopes these new connections will mean as much to her as the connections she made during the Nappanee contest.

“It has brought me closer to the other participants. We weren’t looking at each other as competitors but at friends who needed a little help.”