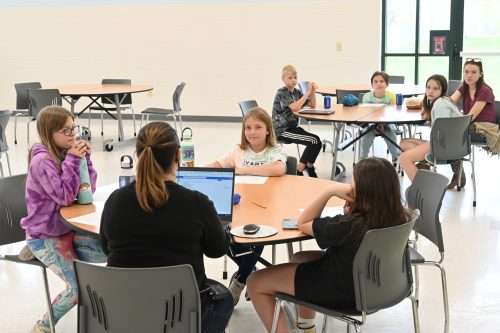 When it comes to deciding how programs are run at the Boys & Girls Clubs of Elkhart County’s Middlebury Clubhouse, input comes from a source that may surprise some.

Members of various age groups are selected by their peers to take part in a Youth Advisory Council. The council meets once a month and is made up of about a dozen members.

“It’s good to hear the kid voices and get their perspective on things around the Club,” said Middlebury Area Director Erin McNeal.

The representatives share what they’re hearing from other members and help determine the staff decisions on what programs the kids would like to see expanded or added. The council members also have the responsibility of running the Club Bucks store on Monday and Fridays. That involves making decisions on how to spend $50 every month for supplies and planning fundraisers.

“It’s a nice way for them to develop their leadership skills. They asked for new denominations to use in the Club Bucks store at one meeting. Because of their input, there is now a $20 and a $50 denomination for the store. They also conducted two fundraisers so far and that has provided some new items for them to sell in the store,” McNeal said.

Some of the council’s ideas have proven to be very popular.

“They helped us create and develop a cadet and junior (elementary age) late night program earlier this year. They had nerf battles and it was a lot of fun. It was so popular we had to cap it at 60 kids,” McNeal said.

At a recent meeting, the council members discussed ideas for the “School’s Out Party”. Members  were excited to learn the staff was willing to bring the “pie for the staff” fundraiser back. That’s where members can throw a cream pie in the face of their favorite staff member.

Council Member Landyn said he enjoys taking part to have some control in the decisions.

“We get to decide what gonna happen at the Club,” he said.

Council Member Zoey agreed, and said they can offer the staff an unique perspective.

“We’re kids so we’re good at knowing what other kids will like,” she said.

MAKE A DONATION TO BOYS & GIRLS CLUBS OF ELKHART COUNTY