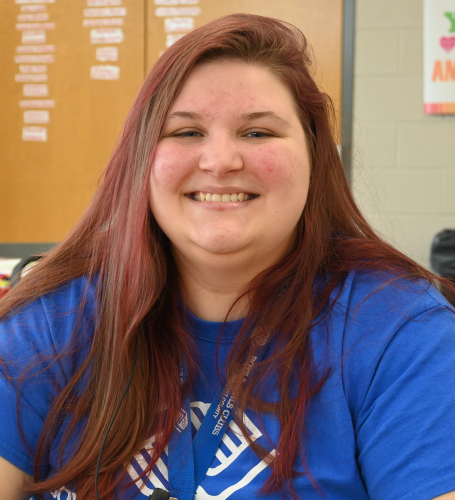 2022 is shaping up to be another year of change for Denise Ward. After working as an assistant in the cadet room at the Boys & Girls Clubs of Elkhart County’s Middlebury Clubhouse, she’s recently taken over as coordinator.

While she’s new in the role, she’s not new to the mission. Ward has been working for the Boys & Girls Clubs for the past five years, both at the Goshen and Middlebury Clubhouses.

“I think the biggest change is being in charge and telling the assistants what needs to be accomplished,” Ward said of her newest role.

Working with dozens of first, second and third graders each day comes with its challenges, but Ward says she loves the age group and the reaction they have toward her. She said she draws satisfaction from helping them and being a shoulder for them to lean on.

“Even when there are behavioral issues, they still come to me… even when they may not like me some days,” she joked.

That relationship can be important and goes to the mission of the Club.

“I want them to know even through they may be having a hard day, they have a place to go. I want to give them tools to work through their problems,” Ward said.

She also works to help people not familiar with the Club understand what happens inside the Clubhouse and who is taking part in the programs.

“Growing up, I thought the Boys & Girls Club was where the kids with behavior issues went. Now I know that all the kids have good experiences here and can learn from being here,” she said.

Ward said she strives to make sure that kids are engaged every day, and those who are struggling get the support they need.

“The program varies day by day. I try to incorporate different activities. Sometimes it’s big group games and sometimes it’s individual activities to help them if they’re struggling in a certain area,” she said.

The relationship within the team is also what keeps her energized on a daily basis.

“This is the best relationship I’ve had with my co-workers. They are like my second family,” she said.

But the focus is on the kids. Ward said she hopes that the young people she’s working with now look back in future years with great memories of the time they spent in her room each day.

“I hope they look back and know I never gave up on them.”