Life has a way of turning something temporary into something permanent. That’s been the case for Laura Heiner. 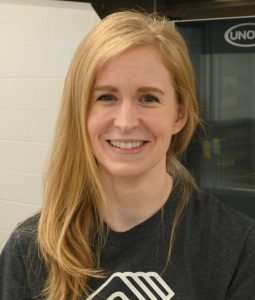 “I wasn’t going to work during the summer break, but the school told us the Club was looking for people to help out. We talked about doing it together and the Club agreed to that,” Heiner said.

Their plan was to prepare meals and snacks during the summer at the Club and head back to school in the fall.

“But we fell in love with the kids and the staff so we wanted to stay on and do both,” she said. “It was the best of both worlds. I could have a summer job, but my kids had a great place to spend their days with their friends.”

Heiner said her 6-and-8-year old sons were thrilled when they found out she was keeping her job at the Club because it meant they could stay, too.

“They had asked to come to Club because they had friends who come here, but it didn’t make sense since I was able to be home with them after school. They were thrilled when I took the job and they knew when they were going to keep going,” she said.

Heiner said she enjoys having the time at the Club to build relationships with the members.

“I love getting to know them and being able to invest the time in them. The teens actually choose to come in and help us as we cook,” she said.

Recently, one teen wanted to bring her chili recipe in to cook for everyone.

“They were a great team getting that dinner together. Different kids bring different strengths to the table to help bring it all together.”

Heiner said she and Kantz try to cater to foods the kids’ tastes.

“But we add that healthy aspect to it. We will ask the kids for their requests and then incorporate the healthy things to go with it,” she said.

Another aspect that drew her to stay was the team members in Middlebury.

“The way they work with the kids is so fun to watch. This is a great environment for them.”