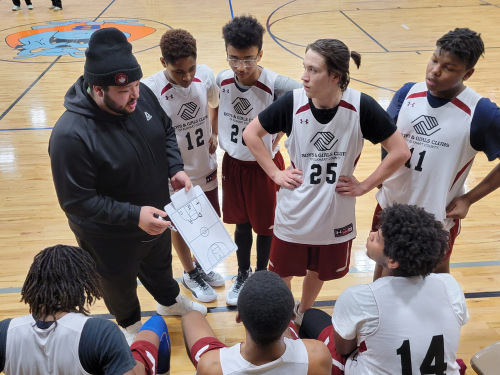 There’s nothing more affirming of the mission of the Boys & Girls Clubs of Elkhart County than to have a former member become a mentor and join the team. That’s the story Devon Rahe brings to young people at the Goshen Clubhouse.

The cadet room coordinator works to make sure our first and second graders are inspired and empowered on a daily basis. His co-workers cite his calm demeanor when working with the kids as a big reason for his success.

“I can relate to them. I had some troubles as a kid. That’s why I started going to Club,” Rahe said. “Club gave me a space away from home where I could be myself. I was always drawing or playing basketball in the gym.”

He attended the Nappanee Clubhouse from the time he was in middle school until his junior year of high school, when he moved out of the area. After graduation, he returned and worked with the Club as part of the AmeriCorps program. Rahe has been part of the Goshen team for the past year and a half.

He said his philosophy for working with the kids is simple.

“I try to make it fun, but if they need a spot to sit, they can come and talk with me. I have an extra chair at my desk.”

In addition to working with the younger kids, he’s a mentor for the teens as well — coaching the sports leagues.

“It’s a different age group so it’s good to be able to talk and interact with them. I enjoy coaching so it’s always been a dream to coach those in high school,” Rahe said. “I try to make it seem more like a family. I don’t want to be the boss. I want everyone to be relaxed and have fun.”

He says that fun atmosphere has an impact off the football field or basketball court.

“Those kids will stop by my room even after their season ends,” he said.

The move to Goshen was a full-circle move for Rahe. While he was a member in Nappanee, one of his first coaches was Tanner Pickett. Pickett is now the area director in Goshen and Rahe’s boss. He’s also been reunited with Da’Jah Frye who works at Club.

“Da’Jah and I played sports against each other when we were Club kids,” he said.

While it’s nice to work with familiar faces, Rahe said it’s all about the kids each afternoon.

“I’m trying to make this a spot where they can come and have fun.”