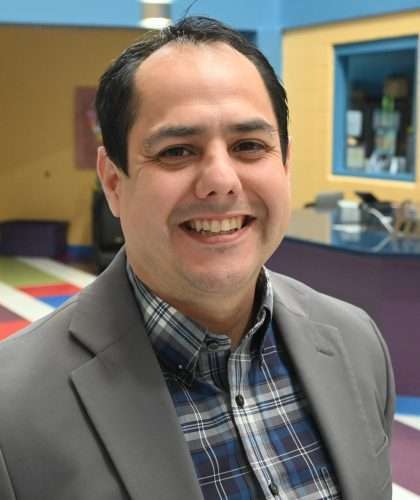 Fidel Mireles knows first-hand that success takes hard work, and you need positive mentors to help keep you on track.

That’s what the new area director for the Boys & Girls Clubs of Elkhart County’s Goshen Clubhouse hopes to share with the team and members who walk through the door each day. 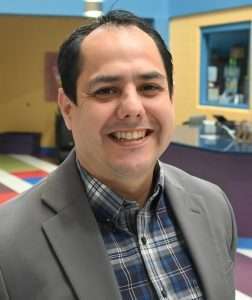 “I lived it. You wouldn’t know it now, but I was near the bottom of my class in high school, but I always had someone who believed in me. That’s what I love about Club. We can give them opportunities and encouragement,” Mireles said.

That encouragement helped convince him to finish high school and then get a college degree. Mireles said his association with Club goes back to those high school years — with occasional visits to the Club located in the basement of his high school.

“I would actually go down on my lunch break and hang out. I started seeing their presence with programs like Youth of the Year. Because of logistics, I never made the trip to the actual Club,” he said.

But encouragement from his mother led him to a job at the Club.

“I had a dirty job and my mom had a newspaper clipping that said they were hiring. I ran to the Club and met the teen director. She gave me an opportunity as a teen assistant,” Mireles said.

He would get the rooms ready for the teens to arrive and made sure it looked polished every day.

“When you walk in, you want to get a five-star experience. You want someone to greet you as you walk in,” he said.

He moved into a leadership position with younger kids and learned about the importance of intentional programming for members.

“You need targeted programs that have targeted outcomes. It really works. It really does. You’re going to get one shot to do things if you want to keep members engaged, so you have to do it right. If you have the right expectations, you can meet the members where they are.”

One of his goals in Goshen is to help build the teen programs.

“Teens have high expectations, and they want high quality programs. They want a reason to be at Club. They’re getting ready for life, so we want them to be prepared for a job or college,” Mireles said.

He said the key to success is getting teens invested with different program options.

“They might not know the impact we’re having on their lives, but we’re in a unique position to help them with their own personal growth,” Mireles said. “It’s not easy, but the member has to believe in the value of it.”

He wants team members to understand they are like a coach on the field.

“It’s just we are really coaching the members on how to be successful. That’s how we change the culture. People need positive guidance. That’s what they come here for. They want positive influence, a safe place and a fun place,” he said.

That’s the message he hopes parents who aren’t sending their kids to Club will hear as well.

“It’s a safe place. We have great professionals in our building who are supportive adults for their kids. This is a fun place,” Mireles said. “Parents put a lot of trust in us to do the right thing, so we never want to let them down.”