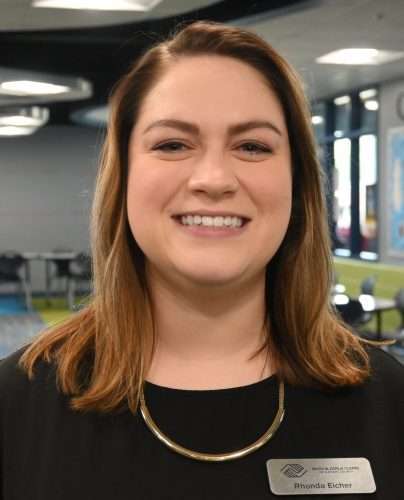 It’s not the career Rhonda Eicher had planned, but it’s one she says has been a happy accident.

The program manager for the Boys & Girls Clubs of Elkhart County’s Middlebury Clubhouse studied chemistry in college and planned to work in a laboratory. A “temporary” job at Club eight years ago has turned into a passion. 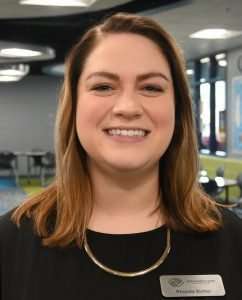 She took at job at the front counter in the Middlebury Club after graduation. That lasted one day.

“I wanted more interaction with the kids. There were a lot of open positions at the Club so I moved into the games room coordinator position.”

She did that for 6 months before her next move.

“I had been volunteering in the Teen Center. I really connected with them and got to know them. I knew that was something I wanted to grow into,” Eicher said.

When the teen coordinator left, she applied for that position and got it. She worked with the teens for several years before moving into her current role. It’s one that allows her to still be involved with teen programs.

“Being with the kids is the fun part of the job. Being involved with Keystone Club and Torch Club (leadership programs for teens), I didn’t want to give that up,” she said.

Eicher knows how important quality programs are in attracting members.

“Our biggest thing is after-school programming. Running that for all aspects of the Club — making sure they are having an experience they will remember — is an all-encompassing thing,” she said. “Even though I don’t run the individual programs daily, I know what is happening so I can step in and run the programs when I’m needed most, like vacations and sick days.”

She’s filling in at the Junior Room right now while that position is open. She’s working to ensure those 4th and 5th graders have meaningful programs for the summer.

“I feel like the relationships you build with the members is important. They don’t come back to play foosball. They come back because they have the relationship with the team members they know. It’s a comfort level that allows them to open up to you. They feel seen and heard,” Eicher said.

At the end of the day, she hopes that is what inspires and empowers the members to reach their full potential.