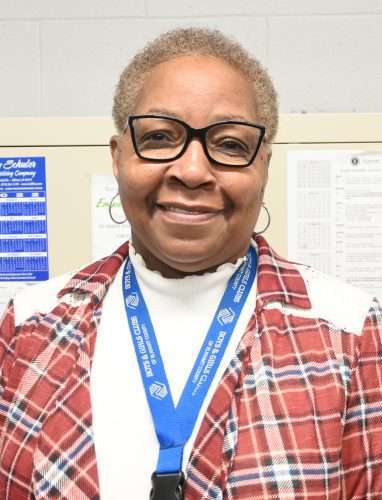 One thing is certain. If you’re not in a good mood when you walk into the Brady Clubhouse, you will be after you talk with Alice Baker. Miss Alice, as she is lovingly called, is the one who greets everyone at the front counter. 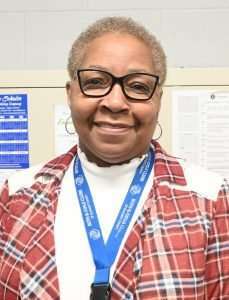 “This is a customer service counter. I greet parents, take new memberships. It’s an all-purpose job,” she said. “I like this job. It can get a little hectic, but I can handle that.”

Baker has worked at the Elkhart Club since 2015 and says she gets her energy from the kids she deals with each day.

“These kids keep me going. They are like the Energizer Bunny!” she joked.

The kids are like an extended family to Baker, who has three kids of her own, is a grandmother to 13 and a great-grandmother to four.

At a time when many might be considering retirement, Baker said that’s not for her. 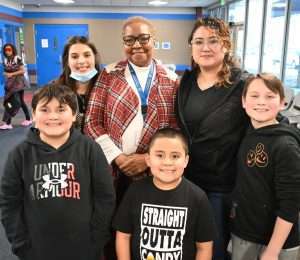 “I’m a mature old lady with some spunk. I’ll be 73-years-young in June,” she said. “I’m a people person. I love kids. I’m easy going, and I have to get out of the house. I don’t like being homebound.”

She enjoys the stability that she can offer the members who come into the Clubhouse and says having a familiar face is important for the parents as well.

“The parents seem to love me. I think they feel like they can trust me with their kids. I’m not letting their kids leave if I don’t know who is picking them up.” Baker said.

She has formed relationships with the parents and enjoys the interaction she has with many of them each afternoon.

“I’ve met a lot of nice people at this counter. I think I’m easy to talk to and I like to joke with people.”

As parents arrived to pick up their kids one afternoon last week, she jokingly asked, “Why do you like me?” One mother responded, “What’s not to love about you.” Baker jokingly added, “See, I didn’t even tell her to say that!”

It’s that kind of interaction with both parents and members that makes her that calming influence at a busy intersection inside the Clubhouse.