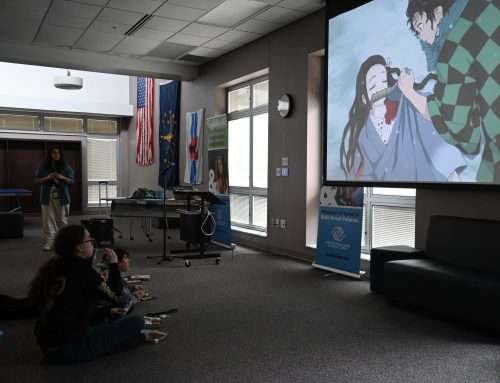 Unique and engaging programs are at the heart of attracting members at the Boys & Girls Clubs of Elkhart County’s Elkhart Teen Club. One of those programs is an anime club that recently launched in partnership with the Elkhart Public Library.

Anime is hand-drawn and computer generated animation that originated in Japan. It’s a diverse art style highlighted by a variety of character proportions and features. The most common characteristics are large, emotive eyes.

Andrea Torres from the library approached the Teen Club after the Boys & Girls Clubs’ county-wide art show earlier this year. She said the Club was a way to get a presence in a school-type setting.

“This is a safe place where they can like something a little different and enjoy what they like with other students,” Torres said.

Teen Club Art Supervisor Nicole Rininger knew the members were interested in anime, so she jumped at the partnership.

“They are excited because this art style is so popular. We’ve had a good response,” she said.  “I think it’s the stories that draw them in. The secondary thing is the amazing visuals associated with the art.”

During sessions, members will watch an animated series and discuss the art and the styles involved. Rininger will then use that discussion in other areas.

“I will use some of what they learn and incorporate that into art projects at Club,” she said.

Members like 10th grader Jessica said the anime club tied into an interest she already was exploring.

“Watching anime gives me the inspiration for my own work and getting new techniques to draw it,” she said. “You can learn from the style you see and then incorporate that into your work and really make it your own.”

She admits she was surprised to see this type of activity offered at Club and likes that it pushed her to try new things.

“I knew I would enjoy it — and it gets me out of my comfort zone. I normally don’t join clubs. This is helping me get out of what I do every day and try something different,” she said.

Torres said the discussions about style and culture have another impact as well.

“Anime is still literacy and encourages them to read. I’m trying to encourage reading through what they like. We tell them they can come to the library and see more of what we’re doing here (at Club).”