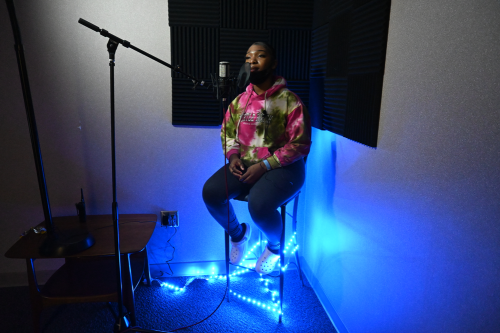 Woods will be one of 10 people from around the country chosen during a talent search competition. They will perform in front of a couple thousand people in Chicago.

“It’s special because she’s been a Club kid for years. This is only her second try in the competition so to be going to Chicago is amazing,” said Elkhart Club Area Director Whitney Miller.

Woods was told she was chosen during a surprise video call from Boys & Girls Clubs of America President and CEO Jim Clark. She took the call in the Club van after school.

“I had no idea. I was told there would be a surprise for everyone today,” Woods said after the call.

While she kept her composure on the outside and told Clark she was speechless, Woods said on the inside she was feeling something completely different.

“Honestly, on the inside I’m screaming! I’m just grateful I’m getting this opportunity. Success from here!”

This is the second year that Woods entered the competition. She was notified in January that she made it to the semi-final round. Now that she knows she will be headed to Chicago, she said she’s not nervous about performing in front of a large crowd.

“It’s extremely exciting. I don’t think I’ll be nervous, but we’ll see when I get there,” she said.

Her family plans to travel with her to watch her perform — including her sister from Oklahoma who is making travel plans.

“When I got the first notification (about the semi-final placement), my parents weren’t necessarily surprised, but you know how many talented people there are out there,” Woods said.

Now, that she knows she’ll be performing, she will work on polishing her performance to shine as a representative of the Elkhart Club. Club leaders hope this success will spur others to take a chance with opportunities that are presented to them.

“We’ve tried to enter this particular competition several times. So to have one of our members make it all the way is beyond thrilling. I’m very excited for her,” Miller said.