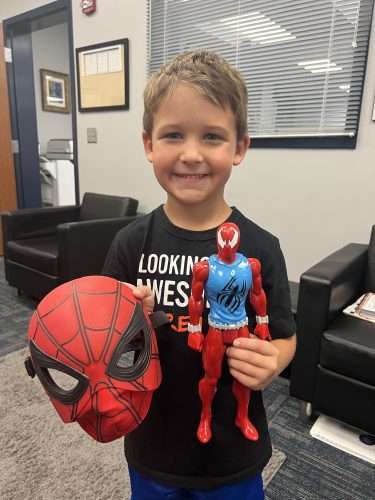 The Boys & Girls Clubs of Elkhart County work hard to inspire and empower our members to reach their full potential as caring, productive and responsible citizens. Part of that mission involves creating a sense of empathy toward other members and the people they encounter on a daily basis.

A six-year-old at the Elkhart Club exemplified that quality for another member who had lost everything in a house fire.

Liam was curious about a donation poster he saw posted at the Club. After his mother had explained why the Club was seeking donations, Liam approached Education Supervisor Nicole Sullivan and asked who was in need.

The next day, Liam arrived at Club holding a Spiderman mask and action figure. He explained to Membership Coordinator Alice Baker why he was bringing the toys with him.

“I went through my toys and I have too many,” he said. “I remembered my friend loves Spiderman and I wanted him to have these.”

Liam demonstrated caring for his friend at a time of need. It’s a lesson in empathy that he’s mastered at a very young age!