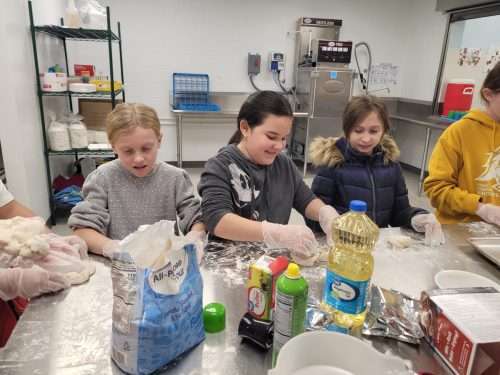 Kids at the Boys & Girls Clubs of Elkhart County are traveling — without leaving the clubhouse.

Members at the Middlebury Club are taking part in an “Around The World” program that is being spearheaded by Art Coordinator Marisa Lutton.

“I wanted to do a craft section to expose the kids to something different. We decided to incorporate a little about geography and then we added a cooking class as well,” Lutton said.

She picks places from every continent, so members can learn about the culture. From there, art projects incorporate some creativity, and the cooking stimulates the taste buds.

“I wanted to do things that they don’t typically know about. I research snacks for this age group, and I try to make sure it will fit into the time we have available,” Lutton said. “I want kids to be able to take the idea home and share it with their families.” 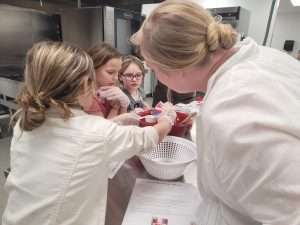 “When we talk about the different places, I ask them what they think people might eat as snacks there,” she said.

While Lutton admits she is out of her comfort zone teaching cooking, she is helped by volunteers. That has added a different “flavor” for the members as well.

“They have traveled to some of these places and have added some insights about the things they’ve seen and experiences,” she said.

Because some of the ingredients might be unknown to the members, they’re encouraged to at least try the snack — even if they think they might not like it.

“When we made strawberries and cream, some of the kids balked at the use of sour cream while we were making it, but they ended up liking the contrast with the strawberries when it was finished,” Lutton said.

Some members have made connections to their families as well, remarking that their parents or grandparents make similar dishes. Lutton hopes that they’re excited to be exposed to new things.

“They come from such a small community that it’s been fun to open their eyes to different cultures. They see what’s out there and learn about places where they can travel,” she said.

While the latest session are just wrapping up, Lutton is hoping to offer it again.

“The kids are really enjoying this so I would like to do it this coming summer when we have a little more time to tackle some different dishes,” she said.