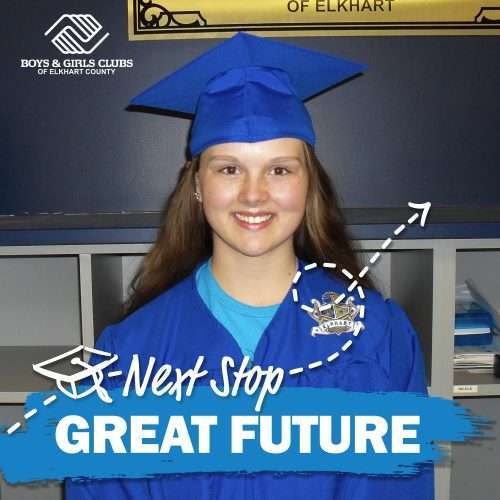 Olivia Kinzer isn’t your typical graduate. She’s graduating a year early – alongside her older sister Allison. Kinzer has been coming to Boys & Girls Clubs of Elkhart County’s Elkhart Club since she was in kindergarten.

“My grandpa decided to put us in Club so we had things to do besides being at home,” she said.

She says when she first started attending, she was very timid – and would hide under the foosball table while the other kids played. A staff member got her to open up and meet other kids. That’s how she met her best friend Mia.

“I think about that all the time,” she said.

She credits Club for paying a big part in getting her to where she is today.

“I just love being here. It’s a safe place. It feels like home.”

Kinzer says she met a staff member who became a mentor in the girls’ program. That staff member would help with homework and talk through issues that life presented.

“She was a big influence for me as a teenager. Not just a mentor, but a friend.”

Kinzer is now an intern in the Elkhart Club, interacting with the younger members. She wants to be that mentor for others and change lives for as many children as possible. She says she would recommend the Club experience to others.

“I would tell friends that it will motivate you to do better in life. The connections you make here are so important. You can come here and feel safe and build a family of your own,” she said.

While Kinzer isn’t certain about her plans after graduation right now, she says she does have an interest in pediatric physical therapy.