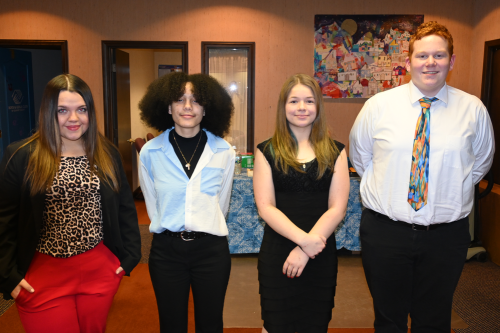 Four outstanding teens from Boys & Girls Clubs of Elkhart County have been chosen to represent their Clubs in 2022’s Youth Of The Year competition.

From left: Kiley Hutton from Goshen Club, Satarah Tittle from Elkhart Club, Paige Truman from Nappanee Club and Andrew Deal from Middlebury Club are the 2022 Youth Of The Year winners at the Boys & Girls Clubs of Elkhart County.

Youth Of The Year is the Boys & Girls Clubs’ signature effort to foster a new generation of leaders. It focuses on leadership skills such as communication, goal-setting and teamwork.

Candidates for the honor write several essays, participate in interviews with judges, prepare and deliver speeches, develop a resume of their activities and solicit letters of recommendation about their leadership and potential.

All four of the Elkhart County winners are heavily involved in their school and Club activities. They cited that experience in their interviews with the judges.

“The activities you can get involved with at Club are so incredible,” Deal said. “The experience and friends I have wouldn’t be possible without it.”

“When I’m at Club it gives me something to do that’s impactful,” Tittle said. “It’s also a comfortable place.”

The teens told the judges that there are issues facing teens today they hope to help overcome.

“Right now, self-awareness is a big issue,” said Truman. “A lot of people my age can’t open up because they have been isolated during Covid. We need to teach them how to open up.”

“It affects teens in a way that’s hard for people to understand. We take social media and mask our problems with it. It’s sad to see how negative it can be if you let it,” she said.

Hutton was selected from among the four to represent Elkhart County at the state Youth Of The Year competition, with hopes of moving on to the regional and national competitions.

Six teens, including five regional winners and a national military youth winner, advance to the National Youth of the Year Celebration, where one outstanding young person is named Boys & Girls Clubs of America’s national teen spokesperson.

The Boys & Girls Clubs of Elkhart County began operations in 1956, and today the Clubs provide programming and services for the most at-risk boys and girls within the community. Each day, the Clubs provide powerful relationships with the youth they serve and open avenues of opportunity for young people across their community by offering safe places where young people can learn, grow and succeed.